In the SeaDragon offices in Stoke, the pictures on the meeting room doors speak to what the business is focused on: fish - and, more specifically, the high DHA Omega-3 oils that can be derived from them to produce what the company calls ‘the world’s best brain food’. 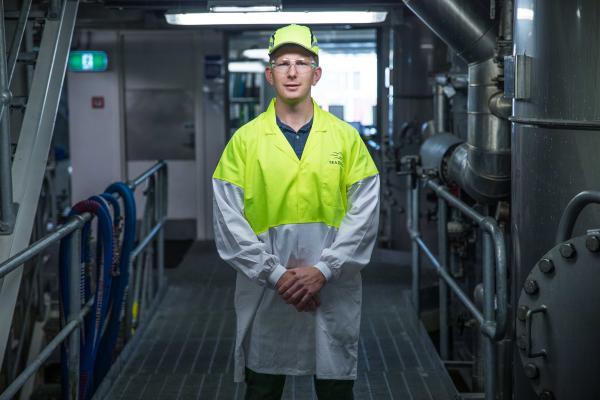 “People are constantly looking for the next amazing little compound, where proven things like fish oils have been taken for 50 years,” says SeaDragon’s sales and marketing manager Mike Rutledge. “EPA and DHA are the 6th most-researched quasi-medical compound in the world, with around 40,00 published studies on EPA and DHA [Omega-3 fatty acids]. If you get your dose right, there are some really robust benefits.”

And SeaDragon creates those benefits by turning a waste stream into a revenue stream. After the fish has had all the good stuff knocked off for fillets or canning, everything else gets rendered. This creates fish meal, which is mostly used for animal feed, and a byproduct of that process is an oil stream, which is bought by SeaDragon and transformed “from something that is not at all palatable into an ingredient with proven health benefits” that can be added into things like infant nutrition or nutraceuticals.

While the science of fish oils may be compelling, there are some engrained perceptions among consumers and Rutledge says that’s what SeaDragon’s process has solved.

“I mean, Cod liver oil is horrendous. If it tastes like that, why would you? If you’re taking an Omega 3 supplement and you’re getting that fishy reflux, it’s oxidised, so you probably shouldn’t be taking it. Our process is the valuable thing and we’ve refined it down to be the best in the world.”

Tuna has one of the highest Omega-3 DHA profiles of any fish and SeaDragon’s highly-refined tuna oil is sold to some of the world’s biggest food manufacturers. Human breast milk has high levels of DHA, so when you’re making infant formula, you’re trying to replicate that nutritional profile and inclusion of tuna oil is the industry standard to achieve this.

“That’s why we target infant nutrition. The market is exacting in terms of quality standards and we are now absolutely world-class at refining tuna oil. We’re as good or better as anyone in the world at what we do. When you have a really good product that you can reliably supply, it’s a good place to be.”

While Nelson is one of Australasia’s biggest fishing ports, the tuna it uses comes from the Pacific and Indian oceans and SeaDragon only sources products that have third party sustainability certification from the Marine Stewardship Council or Friend of the Sea.

He says the value of the oil is about 1% of the total tuna, so it’s not driving people to go out and catch more fish.

“We are also trying to build a business around New Zealand hoki. It has a modest Omega-3 profile when compared to tuna or anchovy but it has a fantastic sustainability story and the freshness of supply means the quality of the oil is outstanding.”

He says there’s growing demand in the high-value pet nutrition sector for this product, with some innovative New Zealand companies selling pet food at higher prices than human food.

“They have the ability to add quality, high-value ingredients [like hoki oil] and build a proposition around New Zealand sourcing, so we’re seeing good growth there.”

Nutraceuticals are also a growing market and the company is looking at creating Omega-3 powders for its customers.

Away from the ocean, it’s also developing algal oil to tap into the shift towards plant-based diets.

“When you grow algae, it’s typically an open pond method and you can have a fairly high environmental contaminant load with Indian and Chinese produced oil. We partner with a company that converted a xanthum gum facility in the UK. It’s almost like a giant brewery where algae is fermented in big tanks, so it’s a closed system, and you get a very high quality product.”

Rutledge says there are fish oil refineries in other markets that are 10 or 20 times bigger than SeaDragon, so it has to compete on quality and it is always looking for efficiencies.

“We’ve got a decent bit of kit, but if you're looking at a refinery with the cost of production of Peru, for example, we can’t compete on price. We’re a manufacturing company and New Zealand is an expensive place to operate. So if you’re not lean and efficient, and high quality, you won’t survive. We’re absolutely focused on not wasting anything.”

As an example, he says it has recently approved a couple of projects to turn two waste streams from the refining process into biodiesel, some of which will be used to run its boiler.

“Another project is working with a building supplies company to use another waste stream in something that can go into pavers.”

The decision to put a fish oil refinery a long way from the fishery supply and its end markets and pick one of the hardest fish oils to refine without a ready source of appropriately skilled labour available locally meant it was a pretty steep learning curve.

“It’s a bit of a United Nations here … I think only about 20% of our staff are actually from the region and our staff list includes people from the UK, Italy, Brazil, Argentina, Taiwan and China. Others have come from other places in New Zealand to work at SeaDragon.”

Talent attraction remains a challenge, especially in technical industries where particular skillsets are required. But Nelson has proven to be an attractive location for the staff it needs.

And he doesn’t believe there’s much evidence of ‘sunshine wages’, either.

“What we do have is quite a lot of primary production; a lot of horticulture and fisheries jobs, which are by nature seasonal and semi-skilled, so that drags the average down. You also have to do the calculation on income to housing. If you earn 20% less but housing is half the cost of Auckland and it’s 5 -10 minutes to work as opposed to an hour each way, you’re still better off.”

Rutledge says Nelson has now become an innovative hub for high-value food ingredient manufacturers and high-value food companies and there is a willingness to collaborate.

Off the back of Covid, Rutledge believes people are being more proactive about their health.

“There’s an uptick in interest and demand for things that you can consume that are going to help you manage your health and certainly Omega-3 DHA is one of those compounds.”

And with new investment secured and revenue on the rise, Rutledge feels SeaDragon is also in good health.

“I’m really positive about the direction of the company. People are knocking on our door. We’ve got a fantastic board and a group of really talented staff, and we’re selling a product that is ultimately very good for people.”