Start your Sunday morning the right way (and the same way that Motueka locals have been starting it for nearly 30 years), hot coffee in hand, browsing the eclectic array of goodies in the Decks Reserve Car Park. A fusion of a farmers, craft and secondhand market, the Motueka Sunday Market is both surprisingly and refreshingly diverse. It’s a true feast for the senses, with the taste of delicious artisan treats, the feel of soft handcrafted fabrics, the smell of freshly baked bread, the sight of extraordinary artworks and the sweet, sweet sound of musical entertainment. 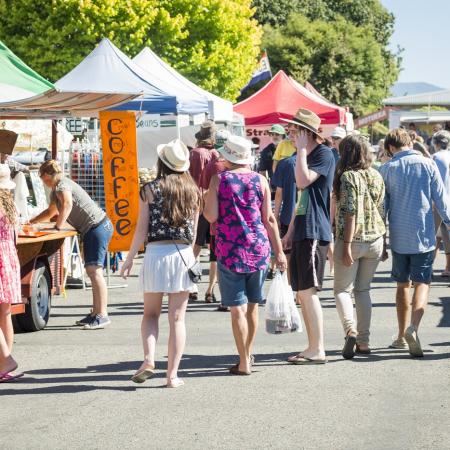 If you’re feeling adventurous, just a few minutes out of the town centre you’ll find a place that can satisfy your need for some heart-pumping action: Skydive Abel Tasman. Nowhere else in the country will you be able to jump out of a plane with views of the North and South islands, three national parks, turquoise blue waters, lush native forest, golden sandy beaches and one of the largest natural sandspits in the world! The answer to ‘Do I do it?’ is simple.. the only real questions that remain are: how high will you go and what life motto will you graffiti your hands with? 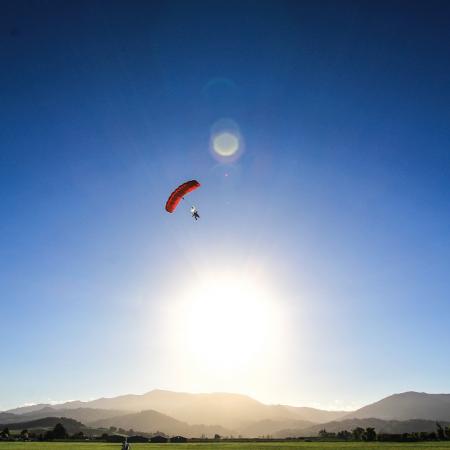 3. Try some donuts at The Smoking Barrel

You know that feeling when you taste something so extraordinary that your tastebuds literally feel like they are dancing inside your mouth, and you find yourself daydreaming for days on end about that piece of decadent deliciousness? That’s exactly how we feel about the Smoking Barrel donuts, and it’s no wonder there are hundreds of them flying out the door every day, with people traveling from near and far to satisfy their sugar cravings. A selection of filled and fried doughnuts sit like prized possessions in a glass cabinet, garnished with labels such as ‘hokey pokey’ and ‘raspberry vanilla custard’, and prized possessions they are... 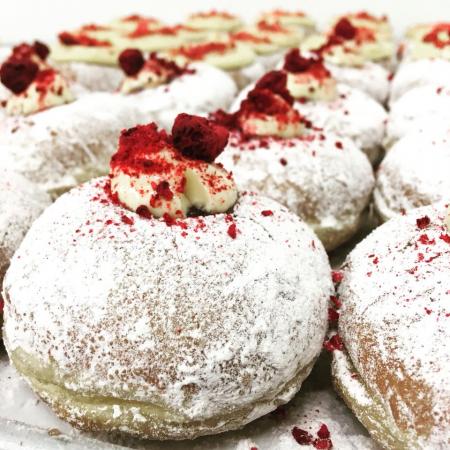 4. Swim at the saltwater baths

Story has it that in the early 1920’s the beach at Motueka was too dangerous to bathe in, after some sharks decided to call the bay their home (who can blame them, really?!). Locals, not wanting to miss out on refreshing dips on hot summer days, decided to raise money to enclose an area on the foreshore so they didn’t have to worry about the marine life underfoot. What started off as a galvanised wire enclosure in 1926, has now developed and become a popular destination for locals and visitors alike, all year round. During the warmer months, you’ll see families paddling in the saltwater pools and sunbathing on the decking, whilst in the colder months, the baths are an extraordinary setting for budding photographers, with the reflective surfaces proving perfect for steel wool and sunset photography. 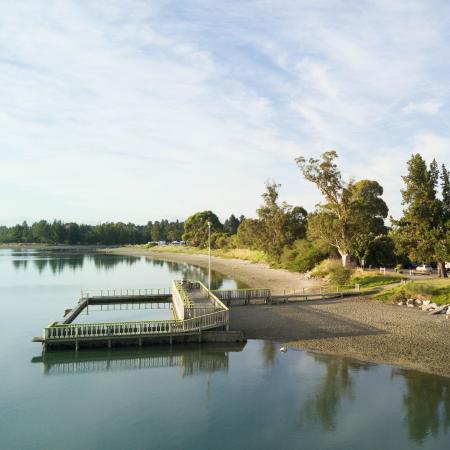 There is a world of treasures just waiting to be unveiled in the lively Motueka town centre, with award winning florists, jewellers, boutique gift stores, restaurants, galleries and artist collectives all making their home along the High Street. A stroll down the main street or around the quirky Sunday Market will leave you in awe of the local artisan talent, as you trail your fingers along the grooves of handmade products or dive your teeth into delicious filled donuts. And the 'hub' of Motueka, Toad Hall, is the perfect place to grab a real fruit icecream or relax with an evening brew, wood-fired pizzas and live entertainment. Make sure you take some time to chat with the friendly locals – you never know what interesting stories you may get to hear! 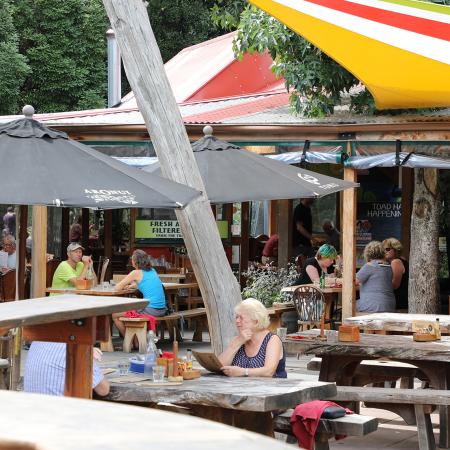 6. Get a photo with the Janie Seddon Shipwreck

A popular subject for photographers near and far, it’s highly likely that you have seen the remains of the Janie Seddon Shipwreck appear on your Instagram feed, but if you ask us, nothing quite compares to a face-to-bow encounter! The iconic ship has a rich and unique history, with a diverse career as a submarine mining vessel, a military ship and a fishing boat. Earning the title as the last surviving military ship to have served in both world wars, Janie was purchased by the local Talley’s fishing group as the first in their fleet many, many years ago. But in 1950 she was laid up on the Motueka Wharf, and after sinking at her moorings a few years later she was stripped of anything of use and left to the elements. To this day, she still lies off the coast of Motueka, and a short walk along the foreshore will take you to her newfound home on what is now possibly the most photographed piece of sand in the area. 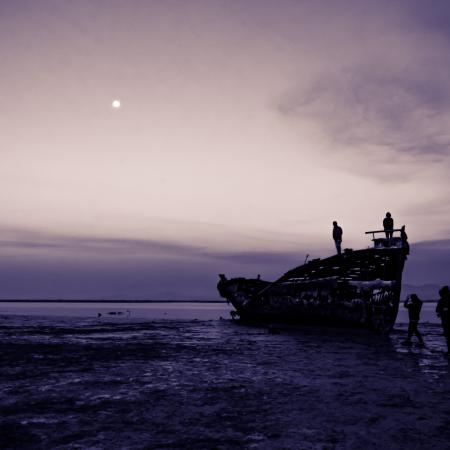 7. Walk to the Riwaka Resurgence

The source of the Riwaka River is an underground spring known as the ‘Resurgence’, a name that clearly reflects the peace and tranquillity of this extraordinary place. The crystal clear springs are considered wahi tapu (sacred) by the people of Te Atiawa and Ngati Rarua, and emerge from the depths of the Takaka Hill, fed by the limestone passages and marble cracks that have formed within the cave over many years. Hugged by lush native forest and sheltered by the deep fold in the mountain, the Riwaka Resurgence is situated just off the Riwaka Valley Road and is a short 20-minute return walk from the grassy carpark. 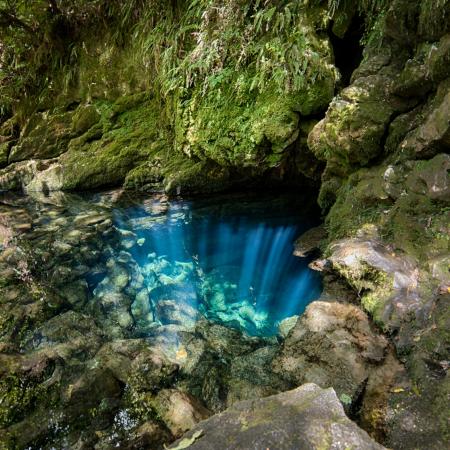 8. Visit the nearby national parks

Whether you’re dreaming about golden sands and turquoise waters, or untracked wilderness and rugged back country, we guarantee we have something for you! Motueka is the gateway town to two of the Nelson Tasman region’s stunning National Parks – Abel Tasman and Kahurangi, and is the perfect base from which to explore the stunning natural landscapes the region is renowned for. We recommend spending a few days here, stocking up on essential supplies and then venturing out into what the locals like to call their ‘backyard paradise’. 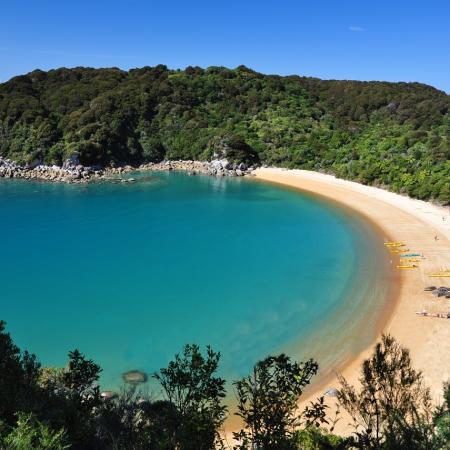 9. Watch a movie at the Gecko Theatre

You know that constant battle between a) the fun experience of going out to the theatre, indulging in buttery popcorn and watching a movie on the big screen, or b) staying home in your PJ’s and watching Netflix so that you can be comfortable and warm? Well, Motueka is a place of true kiwi ingenuity and boy, do they have a solution for you… The Gecko Movie Theatre is a boutique cinema which was started up in the early 2000’s by five friends, and has everything you need for a great night in! Grab a blanket (yes they even supply those), sit back and relax on one of the couches, and watch some of the best feature films and documentaries from around the world … and hey, you could probably even get away with the PJ’s … 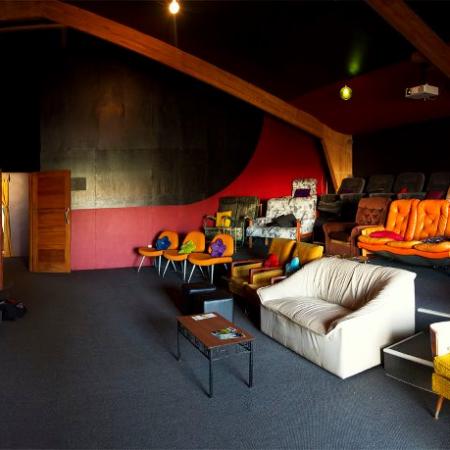 Every anglers dream is to be knee deep in a premier brown trout river, and Motueka can make that dream come true! Fringed with vegetation, the exceptional water quality, long riffles, boisterous rapids and deep pools of the Motueka River make for a stunning yet challenging fishing experience. With guided fishing tours, and specialist lodges such as Stonefly Lodge dotted along the banks of the Motueka River, you’ll have everything you need for the ultimate fishing experience no further than a stone’s throw from the riverbed. 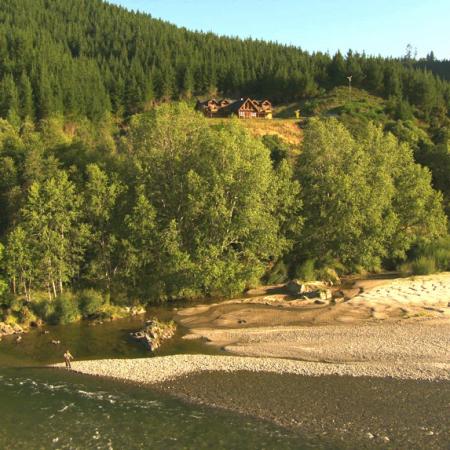