In Shuttlerock’s Nelson headquarters, all the meeting rooms are named after beautiful spots in the Abel Tasman National Park - Totaranui, Tinline Bay, Anchorage and Apple Tree Bay; flags from around the world hang from the ceiling; and large screens play some of the digital and social media ad campaigns that the company has created for some of the world’s biggest brands, like Nestle, Pepsi, Absolut, Sephora and AT&T. 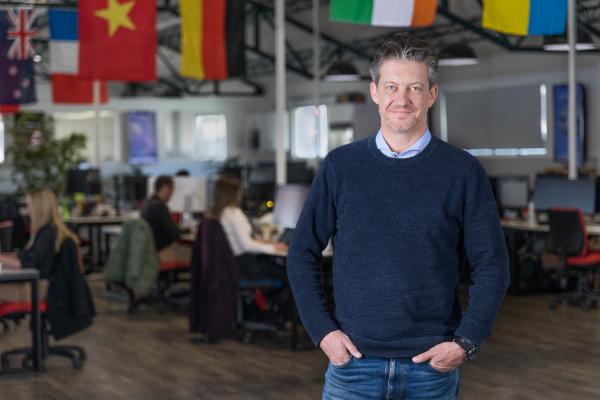 It’s an unlikely combination, but it’s exactly what Shuttlerock founder Jonny Hendriksen was trying to accomplish back in 2015 after a comment from his ex-wife convinced him that he should start walking the talk.

“She said ‘you IT guys you always say you can build tech companies from anywhere but ultimately you end up in New York, or London, or Auckland or Wellington’. To her, it was a bit of a meaningless comment.”

So he moved to Nelson and found a space in the Nelson Evening Mail building. Five staff moved in and that has now grown to 40, with around 25 more set to join soon.

Shuttlerock’s appeal is that brands can take their existing assets like stills, product shots and TV ads and, through a combination of do-it-yourself technology and a team of designers, turn it into material that’s suitable for different digital and mobile platforms - and it’s faster and cheaper than traditional approaches.

Hendriksen has seen success before: he took a tech company called ValueClick public in Japan in 2000 and then started Shuttlerock in 2011, so it’s no fluke that the company now has around 200 staff spread across 10 offices and recently raised another $20 million for further expansion.

“The surprising part of it has been doing it from Nelson. It’s pretty cool to be able to do it from here.”

Hendriksen says Shuttlerock is now basically part of the Facebook family - or, more accurately, the Facebook Alliance, which is made up of 12 CEOs from around the world that talk regularly to its senior management team. Hendriksen says he’s reasonably close to Facebook’s chief revenue officer David Fischer and “He’s always like, ‘I don’t know how you do it from New Zealand”. But with Covid-19 changing the way many people work and do business, combined with an increased awareness about New Zealand following our Covid response and the popularity of our prime minister, he feels it’s increasingly possible.

“I think New Zelaand is seen as an innovative country. Not everyone would know of the software successes [like, for example, Xero, Vend and Timely]. But our reputation as being a frontrunner in dealing with Covid is a wonderful brand image. That’s been a silver lining.”

98% of the company’s revenue comes from outside New Zealand and most of that is from big global brands.

“For example, we’re working with Nestle now in eight countries. Our tech allows their teams to build [a campaign] through our platform. We call it creative as a service. So we’re talking to them and trying to grow the account. That’s how we can scale the business.”

He says being a bit further away from the end customer means “you just have to try harder to communicate better”, but it also means you can move through the timezones. When he wakes up in the morning he’s thinking global from the start. He’ll jump on the phone and call his head of America and, later in the day when Europe wakes up, he can shift his focus to that market.

Being based in Nelson has also been helpful when it comes to recruitment.

“There’s a good representation of locals in the company and we’re attracting people from outside Nelson too. It’s obviously a really appealing place for people to come. A lot of them would bite their arm off to live here so we don’t have to do much to sell it.”

Many people who return to the regions often have a connection to the place. They may have grown up here, married someone who grew up here or they have family in the area. But Nelson is one of those rare places that is on people’s lists as a place to move and that was the case for Hendriksen, who didn’t have a strong connection to Nelson before he moved here with his family.

“The only reason people don’t work in Nelson is because there aren’t enough jobs.”

But fast-growing companies like Shuttlerock are changing that and also attracting a younger demographic because of the types of jobs they’re offering.

“If you want your staff sitting in traffic for an hour and a half twice a day and working every last hour and then going home tired, then good luck to you. But I want the team to live close to work and come in refreshed so they’re more productive and they come up with the most creative solutions. I want them to be getting out there and mountain biking and doing their thing.”

He says his employees are getting a similar salary to what they would be getting in Auckland - in a competitive sector like tech, there’s no room for ‘sunshine wages’ - so several team members in their early 20s have been able to buy their first homes.

“They’re buying in Richmond and Stoke, about 15 minutes away. They wouldn’t have a shitshow of buying their first house that close to work in Auckland. There are so many benefits to the individual. And, really, the company is just the people working for it.”

Technology has a relatively low-impact on the environment, he says. Before the pandemic, its staff travelled a lot, but that’s obviously been significantly reduced and will remain at a lower level for the foreseeable future. So for him, the idea of a regenerative economy is more about how the growth of one company can help the entire region, which is what happened in Seattle when Microsoft moved its headquarters there.

“What you want to be doing is adding value to the economy through creativity and using your brain,” he says. “The trickle-down effect as we grow is that it will flow into the local economy, and not just to the local coffee shop - although they’re quite happy we’re here. We’re starting to develop a nice ecosystem here in Nelson and any opportunity to go local, we will go local.”

He says it is using some local software consultants and it works closely with the Nelson Marlborough Institute of Technology, where a number of its employees have studied.

So how does Nelson attract more businesses like Shuttlerock?

“That’s the million dollar question. It’s going to be easier for the local council to focus on companies in high growth industries, or high-growth companies that are still small.”

The authorities shouldn’t be picking winners, he says. So it’s more about what they can do to make it friendly for the companies that decide to come. It’s not cheap to move a business - or a family - so could a rent holiday convince them to move? Is there a way to help their partners find jobs when they arrive? Or will simply telling the stories of businesses like Shuttlerock and seeing that global success is achievable from an amazing place like Nelson be the clincher?

At the end of our meeting, Hendriksen hands me a Shuttlerock sweater with a picture of an astronaut on the front. Shuttlerock was formed in the last year of the NASA Space Shuttle programme. In that year, the crew of the final Discovery flight visited Christchurch to inspire those who were affected by the earthquakes and the name of the company was a mark of respect to a programme that has “inspired generations to believe that anything is possible” and to the astronauts who were part of it.

“So, have you booked your flight to Mars yet?” I ask.

“No way,” he says. It seems like Nelson has got everything he needs.