Ben Bushell can track his fascination with compost back to a specific moment in his early years when he was at his grandparents’ house in the UK and saw two steaming heaps in the garden after some rain. 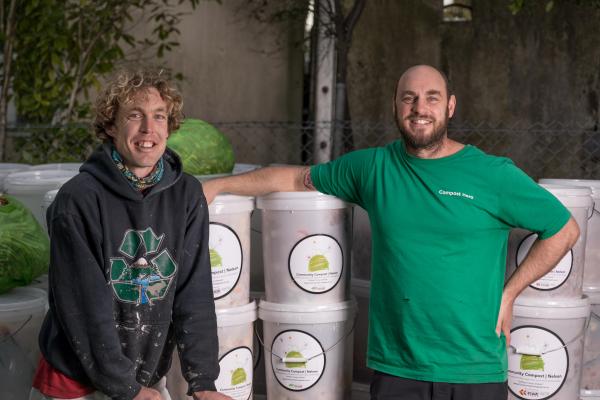 “I was under 10 at the time and I remember looking outside and seeing two steaming heaps. I thought there was a fire and my grandparents said ‘that’s what the rain does to the compost.’ I couldn’t comprehend it. It must have felt really good back then, because it still feels really good now.”

Fast forward a couple of decades, and Bushell arrived in Nelson in search of “more space”. He read a report that showed there were thousands of tonnes of food scraps going to landfill in the region every year and, at the time, he was training for up to 15 hours a week for competitive Crossfit.

“I thought to myself, ‘all I’m doing right now is getting stronger,’” so he decided to channel his energy into something more useful and Community Compost was born.

The scheme started off as a social enterprise and Bushell was very much on his own for a year or so before people slowly started to join in.

“The model was I give you a bucket, you fill it up with scraps, you give me a couple of bucks and I’ll compost it for you. There was never enough money for anyone to be paid, so we started doing it at the community gardens on a Saturday. As I advertised for more scraps, people would contact me and ask if they could help.”

Now it’s evolved into a “social club” that attracts like minded people who really care about the environment and want to do something tangible to help.

As demand for the service grew, creating compost by hand was proving increasingly difficult, so a few of the regulars who were really into composting and could see the potential for a larger scale operation that would be able deal with more of the city’s food waste designed a composting machine they affectionately call bEartha.

“It’s a big green rotating tank. It’s about the size of a concrete truck mixer. And we can fill her about half full.”

The machine was designed to be cheap, easy to use, transportable and city-friendly (with an extractor fan and biologicals that can be added to help reduce any odours). It also has loads of different settings, “just like a microwave”.

“So as long as you have the right recipe, it will take care of itself,” he says.

Community Compost is now selling about a trailer load of compost a week but, in the future, he wants to make machines like bEartha accessible to as many communities as possible.

“You could spread bEarthas around the town and then distribute the compost afterwards. We want to give these communities their composting sovereignty. It’s about getting them to take responsibility for it.”

A report from WasteMINZ showed that food waste comprised 34% of the total household kerbside waste in 2018, and around half of that was deemed ‘avoidable’. If composting wasn’t such a well-established process, it would sound almost too good to be true, but Bushell and his crew take the organic waste that would typically end up in landfill (and produce methane gas), mix it with sawdust from a local logging company and turn it into something valuable. Bushell also uses garden organic waste and he says there is potential to compost pets, roadkill and eventually humans.

“Humans have been composting for centuries. I love it when people call it an idea. It definitely wasn’t my idea, but I think it’s really becoming cool. People are loving it. And they’re proud of it.”

For Bushell, Community Compost is still a small, sideline enterprise and it relies on a strong subculture of volunteer support. While it has dreams of expanding (it’s starting a composting club in Motueka soon), it’s not set up to make a profit. It’s set up to make a difference so it wants to get to a point where it is self-sustaining and do it on a much larger scale.

“Our approach is to make the compost free. I haven’t heard of anyone doing that. We’ll be able to produce hundreds of tonnes a week with those amounts. It’s a small cost to feed the soil. We want to make it available to more and more people to inoculate their land, and start restoring it. It just feels right.”

He believes people are starting to realise how important the soil is for biodiversity and he feels we’re in danger of desertifying our food producing regions in the same way the Egyptians did.

“They didn’t give back enough to the ground. Everywhere there’s farming, everywhere they’re tilling and turning it to dust, it takes time to turn it back to soil … I liken it to looking up into space when we say, ‘woah, that’s big.’ When we look down, I think the same thing. The moment I start scratching the surface I realise that there’s so much we don’t know.”

While compost is the main focus, lobbying for change in the public and private sector and “trying to shift the culture around waste” is also a big part of his mission.

“I don’t think there should be any waste. I’m almost a fundamentalist about it. Why isn’t everything reusable? We have the technology. It’s the economy and business and greed and laziness getting in the way.”

As an example, he says they’re currently pushing the Nelson Market to become zero waste. Reusables would be provided for all the food and beverage stalls, as well as a wash-up station to clean them.

Increasingly, environmental aims and business goals seem to be aligning as capital and customers flow towards more responsible companies. Central and local governments have also committed to net zero carbon and waste reduction policies but he believes there needs to be a carrot and stick approach to the issue: more government funding needs to be given to start-ups and innovators “who are genuine about finding solutions” and landfill has to be more expensive.

Community Compost is one of those organisations that is genuinely committed to finding solutions. And the locals are loving its circular model.

“We’ve got so much support for it. The community wants it to happen. And I’ve found a community of people I really love.”